Busch Gardens released their second Project 2017 teaser video, which shockingly went along with the revealing of what we believe are real site plans for an upcoming project.

Are the Plans Real?

Are these real site plans, and could they actually be for Project 2017? After thorough analysis and reflecting on past and current evidence, we believe that, yes, these are real and almost undoubtedly plans relating to THE Project 2017.

But why? Well, there has already been past evidence for an attraction in the New France area, as our friends at BGWFans have theorized previously, here. BGWFans tells us that Project 2017 will almost certainly be built in New France, behind Le Scoot Log Flume. Since BGWFans has a near-perfect track record for revealing and theorizing the park’s future plans, we’re sure they made a spot-on prediction here.

Additionally, the park has also filed a permit that regards the exact same thing these plans tell us. Perhaps the most interesting thing about this permit is that it still doesn’t regard the attraction in question, just the preparation for it. It is quite possible that the park will file a separate permit for the actual attraction, but in the past, the park has typically only filed one permit for both preparations and the actual attraction, so this is quite peculiar behavior. We just assume it is to make sure information regarding the attraction remains a mystery as the marketing strategy ensues.

What do the Plans Display?

As you can see in this screenshot of the park’s plans, the proposed project site area encompasses the back of “French Fur Trapper’s Village” (better known as New France) and the area behind Le Scoot. Here is a highlighted version of the site plan area via satellite image:

Now this is where things get a little tricky. Some of the plans are intentionally distorted, and we can tell by how all demolition and greenery-clearing plans are blurry and how drainage and some general site plans aren’t.

Perhaps the most telling of all was the portion highlighted below, which shows what is happening throughout the New France area along with this attraction. As you can tell from the legend below, quite a bit of work is going into the area surrounding the 2017 attraction. 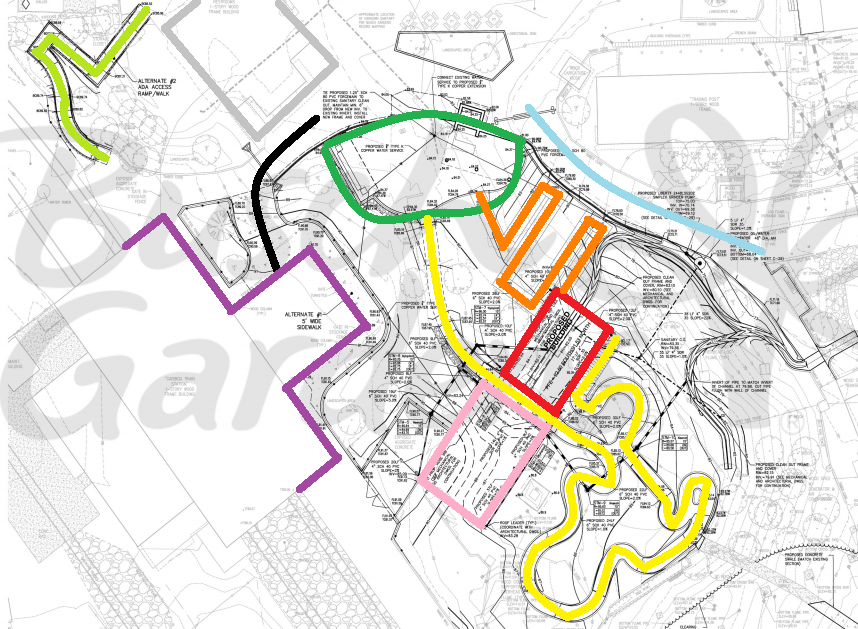 Lots of changes will occur in the New France area…

Dark Green: Plaza area for the new attraction. Seems to contain a photo booth/small gift shop and a locker area.

Red: Proposed building #1. Likely a station for new attraction given connection with the queue and exit ramp.

Also, there was another interesting part of the plans which detailed the height of the buildings being constructed and the max height of the “attraction,” which as you can see below is 60’. This may not tell us that much, but it’s definitely one of the largest details we know about the attraction at this point, that is only if it is referring to the actual attraction coming in 2017.

There maybe other portions of the plans that we can hypothesize about, but since they don’t tell us any solid information, we won’t go into analyzing those at this time. If you want to study the entirety of these plans, you can check them out here. We’re always looking for more information, so if you find something new in the plans, be sure to let us know!

At this point, it’s safe to say that whatever Project 2017 is, it’s going to be something very notable.

To stay up to date with everything regarding this story, be sure to follow Busch Dominion on Instagram, Twitter, and Facebook for all the latest updates. And don’t forget to join the discussion by visiting the ParkFans Forum Project 2017 thread, or by leaving a comment below.